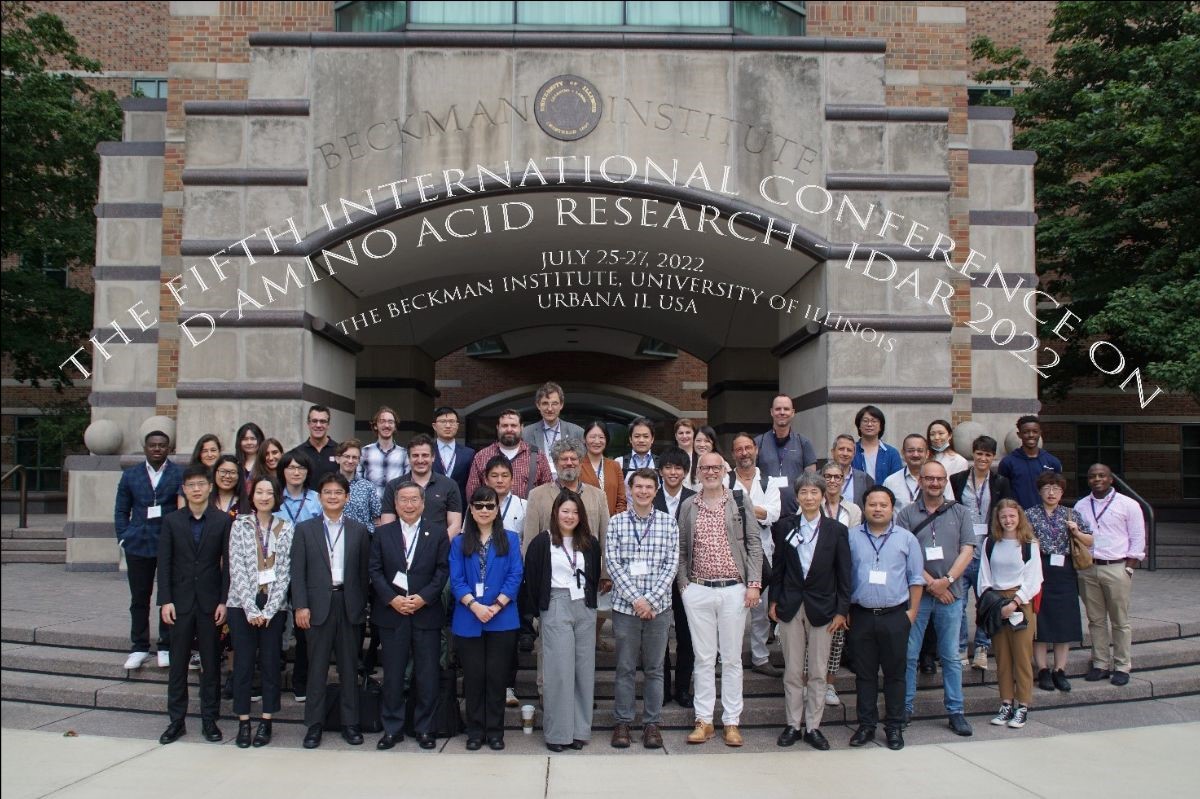 All the researchers attending the IDAR2022 meeting in Urbana (USA) thank Jonathan Sweetler and his staff for the organization of the congress during such a difficult period. A big success and a well-suited tool for the “D-amino acids community”. For more info: https://conferences.illinois.edu/IDAR2022/   Do you have news concerning the D-amino acids field to announce? Is there a relevant published paper to mention? Write us and take the advantage of this bimonthly Newsletter.
RECENT PUBLICATIONS

The Editor’s pick selection of the most intriguing papers is highlighted in yellow.

D-Serine modulates excitatory neurotransmission by binding to NMDA receptors; it is degraded by D-amino acid oxidase (DAAO or DAO) in the central nervous system. Since the definition of the cell types that express brain DAAO is still controversial, here the authors generated astrocyte-specific DAAO-conditional knockout mice: DAAO expression in the hindbrain was eliminated and the level of D-Ser was significantly increased in the cerebellum while the levels of other D-amino acids in the forebrain or periphery were not altered. These results show that astrocytic DAAO regulates D-Ser specifically in the hindbrain.

In this work individual microorganisms of rat gut microbiota were isolated and profiled their D-AA production in vitro, focusing on D-Ala: a total of 38 unique isolates, grouped into 11 species, were isolated. 19 out of the 38 isolated strains were then identified as D-AA producers. The authors observed large inter- and intra-species variation of D-AA production profiles from rat gut microbiome species, demonstrating the importance of chemical profiling of gut microbiota in addition to sequencing, furthering the idea that microbial metabolites modulate host physiology.

In 2002, the novel human gene G72 was associated with schizophrenia susceptibility. This gene encodes a small protein, named pLG72, which represents a rare case of primate-specific protein. This review summarizes the results of 20 years of biochemical investigations on pLG72, which main known role is related to its ability to bind and inactivate D-amino acid oxidase, i.e. the enzyme that controls the catabolism of D-Ser, as well as to affect mitochondrial functions. Notably, the level of pLG72 in the human body is still a controversial issue because of its low expression and challenging detection.

Selected D-amino acids that act as NMDA receptor modulators have emerged as a potential augmentation strategy in those cases of schizophrenia that do not respond well to antipsychotics, a condition defined as treatment-resistant schizophrenia, affecting 30–40% of patients, and characterized by serious cognitive deficits and functional impairment. This review addresses the efficacy of D-amino acids, including D-Ser, D-Asp and D-Ala, in poor responders. The impact of these molecules on the synaptic architecture was also considered in the light of dendritic spine changes reported in schizophrenia and antipsychotics’ effect on postsynaptic density proteins. The compounds targeting D-amino acid oxidase and D-aspartate oxidase enzymes were also reported, as well as drugs acting at NMDAR and proxy of D-AAs function, such as D-cycloserine, sarcosine, and glycine.

O2 as substrate for bio-transformations can be supplied by release of soluble O2 from H2O2 by catalase. This paper reported about the monitoring and control within a porous carrier of the soluble O2 formed by an immobilized catalase upon feeding of H2O2. The internally released O2 was used to drive the reaction of D-amino acid oxidase on D-methionine; the enzyme was co-immobilized with catalase on the same carrier, taking care to avoid enzyme inactivation by excess H2O2. The reaction rate of the co-immobilized enzyme preparation is shown to depend linearly on the internal O2 concentration up to the air-saturated level and showed ∼1.6-fold increase as compared to the same reaction under bubble aeration.

The pathogenic strain Escherichia coli O157:H7 (E. coli O157) causes food poisoning: a strategy that can simultaneously remove free E. coli O157 and the biofilms it forms was set up in this paper. Composite nanofiber films were synthesized by co-encapsulating E. coli O157 phages isolated from domestic sewage and D-phenylalanine into sodium alginate (SA)/polyethylene oxide (PEO) nanofibers by electrospinning (dehydrated trehalose was added as a phage protectant). When SA:PEO was 3:9, the spinning solution showed optimal properties. The antibacterial experiment showed that, compared with the control, the addition of D-Phe slightly enhanced the antibacterial activity of the nanofiber films against free E. coli O157, and the bactericidal rate within 8 h was 99.74%. On the other hand, D-Phe significantly enhanced the inhibitory activity of the nanofiber films against E. coli O157 biofilms, with the inhibition rate exceeding 99.99% within 72 h.

Chronic granulomatous disease (CGD) is a primary immunodeficiency wherein phagocytes are unable to produce reactive oxygen species (ROS) owing to a defect in the NADPH oxidative complex. Since improved treatment strategies against CGD are urgently required, here the polyethylene glycol–conjugated recombinant porcine D-amino acid oxidase (PEG-pDAAO) was used to supply ROS to defective NADPH oxidase in neutrophils of patients with CGD, following which the neutrophils regain bactericidal activity in vitro. As an optimization, PEG conjugates of Fusarium spp. D-amino acid oxidase (PEG-fDAAO, more active than the mammalian enzyme) were used. The lung weight and pathological findings suggest the condition was ameliorated by administration PEG-fDAAO, followed by intraperitoneal injection of D-Phe or D-Pro.

Supercritical fluid chromatography (SFC) can be used for the analysis of chiral amino acids: this study set up a novel method for the chiral analysis of amino acids using a system combining SFC and tandem mass spectrometry. Under optimized conditions, ultrafast chromatography of 17 amino acid enantiomers, except histidine, was achieved with retention time ≤ 1 min and resolution ≥ 1.5. This separation method was used to analyze a commercially available black vinegar (detecting 8 different D-amino acids).

This study presented a detailed description of a method that measures D-/L-serine by using conventional HPLC. D- and L-Ser were reacted with ortho-phthalaldehyde (OPA) and N-acetyl-L-cysteine (NAC) to form diastereomeric isoindole derivatives, then were separated and detected by conventional reversed phase HPLC with electrochemical detector (ECD). The amino acids present in brain homogenate were determined: the peak identity for D-Ser was confirmed by selective enzymatic degradation, i.e. by treating the sample with D-amino acid oxidase and catalase to decompose D-Ser.

D-Tryptophan is among the minor D-amino acids discovered in microbes and mollusca. In this work, a highly-selective 2D chiral LC-MS/MS method has been designed and developed focusing on the determination of Trp enantiomers. The system consisted of a reversed-phase separation for the first dimension, an enantioselective separation for the second dimension and also the detection using a triple quadrupole MS for the third/fourth dimensions. Urinary D-Trp in healthy humans and mice were successfully determined: while only L-Trp was observed in urines of healthy humans, small amounts of D-Trp were detected in the C57BL/6J mice (6.18 ± 0.47%). In B6DAO- mice lacking the activity of D-amino acid oxidase relatively high levels of D-Trp were apparent (27.43 ± 3.26%). These results indicate that the urinary D-Trp level is regulated by D-amino acid oxidase in mammals.

In this article, several fluorescent probes have been designed and synthesized for chemoselective as well as enantioselective recognition of selected amino acid enantiomers. The compound (S)-1 showed greatly enhanced fluorescence in the presence of L-Glu and L-Asp, but produced marginal fluorescence response toward their opposite enantiomers and other amino acids. The compound (R)-4 and Zn2+ showed greatly enhanced fluorescence with L-Ser, while (S)-6 is designed for the selective recognition of His. Micelles made of an amphiphilic diblock copolymer were used to encapsulate the water-insoluble compound (S)-8 (for L-Lys) and several (S)-1,1′-binaphthyl-based monoaldehydes (S)-10 (for L-Trp detection). The author proposes that this strategy can be further expanded to develop fluorescent probes for the specific identification of many amino acids of interest.

MORE
INFORMATION
The D-amino acids International Research Center “DAAIR“ has been established in Gerenzano (Varese, Italy) in 2019 with the aim to support and perform scientific research projects and activities on the field of D-amino acids. The Center, located inside the Fondazione Istituto Insubrico Ricerca per la Vita, is aimed to represent a pole of excellence at international level for dissemination and research involving the D-amino acids (Director Silvia Sacchi).   The guiding principle is support the research projects aimed to investigate the involvement of D-amino acids in main physiological processes, from bacteria to humans. The ultimate goal is to actively participate to the elucidation of the mechanisms by which the D-amino acids perform specific functions, and to identify their presence and concentration in different organisms and compartments, also with regards to well-established functional states, with particular emphasis to pathological states. Understand the involvement of D-amino acids in important diseases as a way to set up novel therapeutic strategies.   Contacts: info@d-aminoacids.com; director@d-aminoacids.com; www.d-aminoacids.com
Copyright © 2019 IDAAR CENTER NEWSLETTER, all rights reserved.  https://www.d-aminoacids.com/  mailing address: info@d-aminoacids.com