Chirality, from the Greek word for “hand”, was introduced by Lord Kelvin (1904). Chirality and stereoisomerism configuration are distinct and cannot be used interchangeably. The two forms are nonsuperimposable mirror images of each other (definition from Kurt Mislow, 1999).

The two forms are called enantiomers or optical isomers because they rotate plane-polarized light either to the right or to the left. The enantiomers show differing absorption of circularly polarized UV light. Accordingly, all biological polymers are homochiral to function.

The left- and right-handed forms have identical free energy: for the reaction of changing a left-handed to a right-handed amino acid (L to R), or the reverse, ΔG = 0, so K = 1 (or close).

The absolute stereochemistry is indicated by the (S) and (R) designators (IUPAC nomenclature). A mixture containing 50:50 of L- and R-enantiomers is called a racemate or a racemic mixture.
All amino acids (except glycine) are asymmetric and dissymmetric. 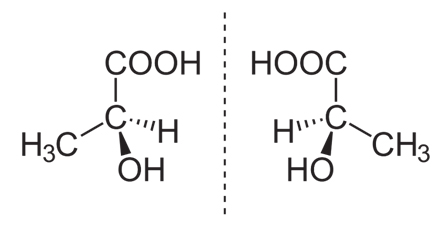 Fig. 1. The two enantiomers of lactate.

The long story of this terminology:

In the early 1800s, the phenomenon of natural optical activity was first observed by the French scientists Arago and Biot. Shortly after, Fresnel developed a theory of optical rotation based on the differential refraction of right- and left-circularized polarized light; the enantiomers show differing absorption of circularly polarized UV light.

Louis Pasteur in 1848 was the first person on history to resolve a racemate: he used tweezers to separate the left- and right-handed crystals of sodium  ammonium tartrate (PTA). The sodium ammonium salt of PTA crystallized as a molecular mixture of two distinct crystal types: they showed optical activity equal in magnitude but opposite in direction.

Pasteur was fortunate: only two of the 19 chiral amino acids self-resolve in crystalline form and only below 23 °C (in the 19th century laboratories were not well heated!). He continued his studies on molecular and crystal chirality for another 10 years.